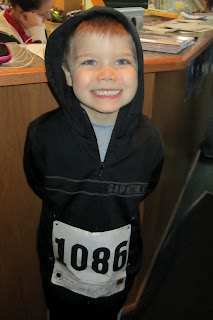 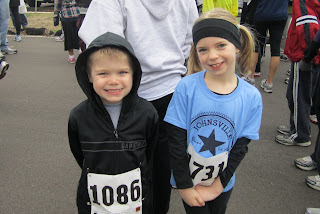 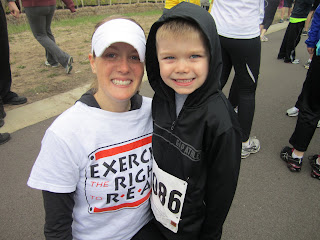 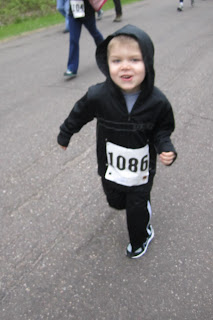 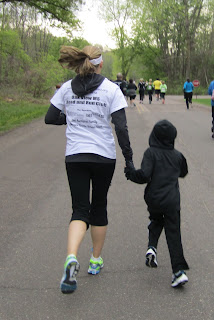 Griffin ran his very first 5K on Saturday. He literally ran the whole way, clocking in a time of 32:35. To say I was surprised and impressed is an understatement, but I guess running runs through his veins like his momma. While I plan to limit the amount of 5K's he does, I look forward to our weekly one mile runs.

The race was simply perfect. The proceeds benefited the libraries in our district, and each student runner received a free book in addition to their race shirt. Griffin was very eager to pick out his book. It was a joy to share two of my passions with him---Literacy and Running

Friends from work were also there, and they added to Griffin's excitement. They pumped him up at the beginning, during, and at the end. We were actually able to keep pace with three particular friends most of the way. It is obvious that Griffin has inherited my competitive spirit because he repeatedly told me, "Mom, we CANNOT let them beat us." He did a phenomenal job of keeping their pace (you know, because he is five), but towards the end he slowed a bit. At the finish, though, they were thoughtful enough to slow down so that Griffin could zoom past them and "win!" THANK YOU Holly J., Anny, and Nikki. Griffin beamed for most of the day.

Afterwards, we went to celebrate with Holly O., Addie, and Emma at Perkins. What better way to end a perfect run with delicious breakfast food and great friends?

I didn't start running until the last couple of years, so I am excited that he found this passion early on. I look forward to watching him run more in the future, but most of all, I am so thankful he has found a HEALTHY way to occupy his time. His team of doctors are so pleased with his progress, and his asthma/allergy doctor told me that this is the best thing for him. Going on runs with this little man is one of my favorite activities right now, and the smile on his face as he ran this weekend proves he loves it too.
Posted by Unknown at 6:16 PM 2 comments: 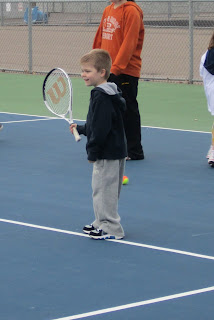 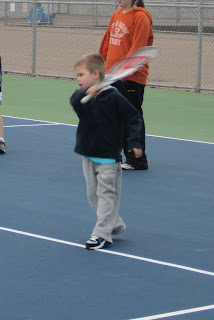 That's what I get for sending him to an aerospace specialty school.
Posted by Unknown at 6:59 PM No comments: 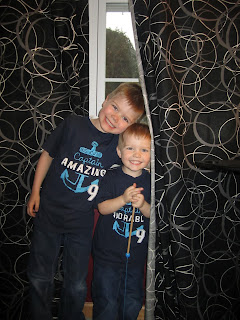 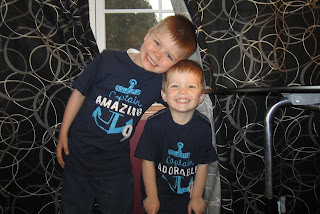 Don't you just love those shirts?
Those smiles?
Those boys?
Yep, I am one happy/lucky/blessed Mommy.
Posted by Unknown at 7:07 PM No comments: 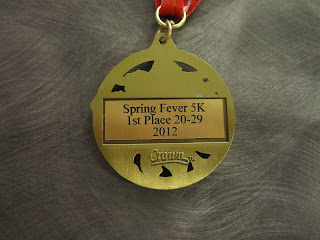 Apparently I need to run while I am sick more often. Yesterday, I ran my fastest outside 5K in a LONG time. I could barely breathe and my head was pounding at the start of the race, but it was a BEAUTIFUL course. My goal was to finish in under 25 minutes. My GPS watch said I did. The clock at the race said I was just over. (Not chip time or anything). Regardless, I won my age group, which was pretty cool. Obviously it was a small race, and I know that placing in my age group doesn't happen very often with a time like that, but it felt good to win my last race in the 20-29 age group :)
Posted by Unknown at 7:02 PM No comments: 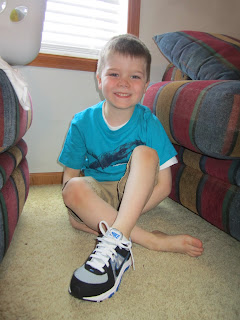 So, off we went to try on shoes.

Good News---we found a pair that wasn't too expensive, and they were great for running.
Bad News---they had regular laces.

Me: Are these the shoes you want?
Griffin: YES!
Me: Okay. But you can't wear them until you can tie them.
Griffin: Okay.

Less than 24 hours later, guess who knows how to tie his shoes? He needs to get better at it, but he can tie them.

Funny what a little motivation can do :)
Posted by Unknown at 7:32 PM No comments:

I know I don't frequent you often. But we need to break up. For good.

It saddens me. It does. My pasty white skin when we attend winter/spring weddings and at the beginnings of vacations will mourn you. But, it's for the better.

You aren't worth it my friend. Not after my scare this week.

My mole came back bad. The skin they cut off around it...thankfully, that's still good.

But the four stitches on my stomach and the heart attack I had when I received the phone call from my doctor solidified what I already knew. It was time for a permanent breakup. (Emails, my chart updates, and letters in the mail mean all is well. Phone calls after hours...not a good sign.)

Don't feel bad. The sun and I... We are no longer friends either. Well, at least not until I lather up in sunscreen.

~Sandra
Posted by Unknown at 7:20 PM No comments:

Two minutes ago I submitted a draft of my Dissertation Prospectus. The final copy is due at the end of summer. At that point, I can submit my proposal to Bethel's Institutional Board (IRB), and they can say yay or nay to me conducting research with students. Goodness gracious I hope they say YAY! But for now, let's just focus on the positives. I am one step closer to that finish line. The one where I can say I earned a doctorate degree. Pretty big finish line if you ask me.

This 20 page draft, though, was a killer. Despite the fact that our professor was brilliant and had us doing mini-assignments that prepped us along the way, the final submission (which is still a draft) took a lot of effort to complete. The whole working full time, having a husband working 70 plus hours a week, and being a mom thing threw me for a loop. My time is limited, and too often I forget that :) Squeezing in running was close to impossible, but I did it. I worked, I mothered, I ran, I researched, I wrote, and I slept. That's what I did for the last week, and not much else.

Actually, don't. I hate that. While I will be proud of my degree, I still get weirded out when I call a person doctor so and so, and they aren't doctors of medicine. My father-in-law is Dr. Dunigan. Not me.

Maybe that will be my next goal.