Each night when I am putting Griffin to bed, he asks me what I plan to do after he falls asleep. Most nights I tell him I will do homework and go for a run.

I long for the day when homework isn't my go-to response.

I long for the day when I don't have to run around like a crazy woman after my children are asleep.

I long for the day when I can go to bed before ten on a regular basis.

I long for the day when I don't have to worry about talking on the phone with my family and friends because I gave up time working on my homework.

I long for the day when I can sit in the other room and just listen to my children breath or simply stare at them while they sleep and NOT have to type away at the computer.

I long for the day when my weekends can JUST be about my husband and our family.

I long for the day when my children's homework takes longer than mine :)

I am close. I can taste it. In less than I year, I should be finished. I know it's worth it. I know I am teaching my kids the importance of life-long learning and hard work. I know that I will be able to attend almost every sporting event when they are older because I won't be going back to school when they are teenagers. I know this journey is getting me one step closer to where I know I am destined to be.

But right now, I just long for the day when my dissertation is complete, and my computer gets used a little less.
Posted by Unknown at 7:54 PM No comments: 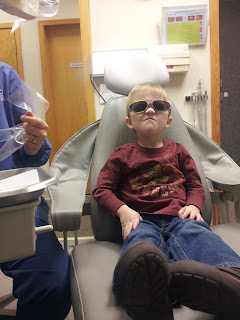 All clear at the dentist for Grayson. Griffin, on the other hand, is having teeth pulled next week :(
Posted by Unknown at 7:54 PM No comments: 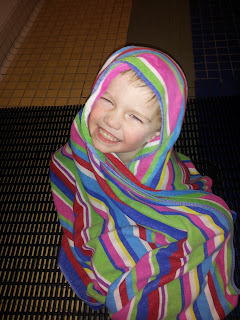 to discipline this cute little face.
Posted by Unknown at 7:57 PM No comments: 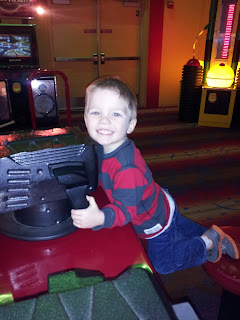 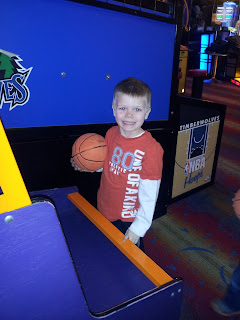 A fitting story for Valentine's Day....

Recently I asked the boys to tell me about love. People my boys know from church were getting married, so I was asking them how Kris and Amy could show love to one another. They knew I was asking these questions so we could give Mr. Kris and Ms. Amy some advice. When I asked Grayson how grown ups could show love to one another, he responded, "By loving Jesus."

He is NOT a product of his environment :)

Posted by Unknown at 7:09 PM No comments: 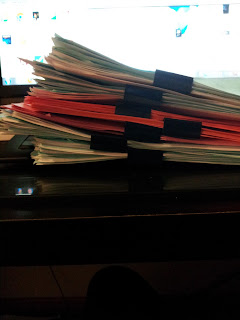 This is what I corrected over the weekend for my 7th grade kiddos. This does not include what I corrected and prepared for my St. Scholastica class. It is a darn good thing I love what I do!!!
Posted by Unknown at 8:45 PM No comments:

Griffin is officially six and a half. Unlike most kids, he simply says he is six years old, but I know he is now officially closer to seven :) I told him the other day that I just wanted to cuddle him like a baby, and he responded, "well that's pretty much over." He quickly said that he would cuddle, but he wouldn't cuddle like a baby.

I was lucky enough to spend his half birthday with him during the day. A stomach bug and a fever kept the two of us away from school, so we spent the day napping, cuddling, and watching television. It was something I needed in order to recharge physically, but emotionally it was so great to be able to just BE with Griffin without thinking about anything else. His illness forced me to just slow down, and I am thankful for that small window of time I shared with just him.

I know I say this often, and I probably won't stop, but our oldest boy continues to amaze me each and every day in all areas of life. I am truly blessed to be his mother and to watch him grow up. I love listening to him tell stories about school and sports, and he asks the greatest questions. Recently he asked, "When I do something wrong, do you love me any less?" Obviously I responded that I would always love him no matter what, but he insisted that was not what he was asking. He told me he knew I would always love him, but he wanted to know if I would always love him the same. Would my love ever "grow less?"  I assured him that I could never love him less; in fact, I imagine my love for both my children will continue to grow as we hit new phases and new experiences to love them in. It makes me wonder what goes on in their brains that they think to ask these things, but nonetheless, I love hearing Griffin's question and stories. I especially love hearing him tell me about the chasing that happens at recess :)

I am forever thankful that Griffin is a lover of books. He likes to be read to, but he also likes to read silently or aloud to us. While there are times when I have to "make" him read, it doesn't take too much prompting before he gets lost in a book. I also love that he likes fiction and non-fiction. I am sure this will change as he gets older, but for now I appreciate the variety. I recently asked him what he thought his strengths were, and he chose reading and math. When I asked him what he needed to work on, he said his handwriting. He nailed it :) I was surprised he didn't say his strength was spelling, though. That kid consistently gets all of his words right, plus the two challenge words. And frankly, the challenge words ARE difficult. I love waiting for him to get off the bus on Wednesdays because that is when he gets his tests back.

In terms of television and movies, he still likes Ninja Turtles, Avengers, and Star Wars. We had to stop watching Clone Wars a while back because he was starting to get nightmares, but he still enjoys playing with his figurines. We have a whole bunch of Ninja Turtle DVD's thanks to Christmas presents, and Netflix provides us with many different cartoon versions of Avengers. 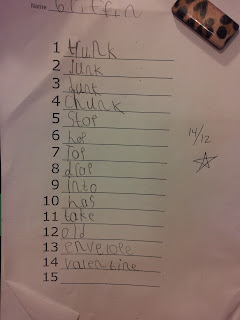 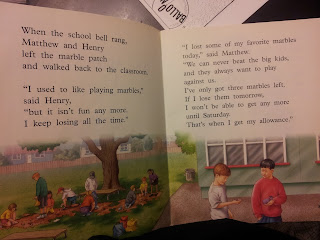 (A sample page from one of his DRA Dot Books) 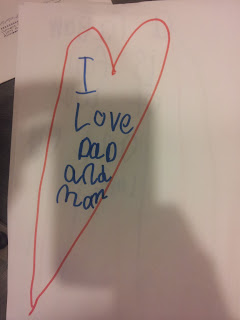 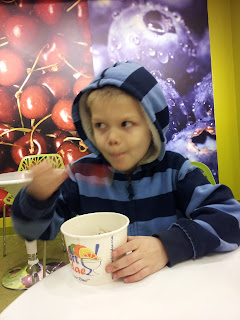 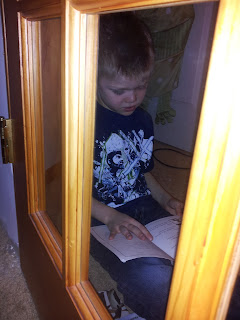 I suck up on him reading...

Recently Griffin had a check-up with the allergist, and we discovered he isn't growing. In fact, his weight hasn't increased in a year and half. I am thankful the nurse discovered this as it wasn't even on my radar. We always knew he was short, but we attributed this to the fact that he is the youngest in his class (most parents tend to wait a year to send kids to school when they have summer birthdays), but we learned it is apparently more than just his age. We are switching up some new meds to see if it makes a difference, but in the end, it was determined that we would rather have a short child who can breathe than a tall one who cannot :) His size, though, has been discussed frequently as of late.  For the first time, Griffin is beginning to notice that he is smaller than his peers. It was beginning to bother him slightly, so we have been making an effort to point out all the things that he can do and does that have nothing to do with size or age. We pointed out that despite his being just six, he plays with 8, 9, and 10 year old kids at tennis. Despite being young and short for his grade, he is reading above grade level. We even pointed out that one day Grayson might be taller than him. And of course I pointed out that I am taller than his dad :) Thankfully this seems to have put his worries at ease.

Like his brother, Griffin packs a lot of punch in his little body. His determination and desire to improve in everything he does is quite evident, and I can't wait to see what God has in store for this precious boy of min.
Posted by Unknown at 7:05 PM No comments: