Grayson to Griffin: "You are my best friend."

Griffin to me: "Christmas is not about presents because they can't be born and they are NOT our king."

Grayson to anyone and everyone: "What's your favorite color?" or "Do you have dogs?"

Griffin to me: "Can you teach me more words with the silent E?"

Griffin after seeing his cousin Samuel wear pajamas: "Can I get a pair of pajamas?" This from the kid who has always worn just a t-shirt to bed and despised pajamas.

Grayson to me: "Where's daddy?" I replied "At work." To which he responded, "Not again!"

Posted by Unknown at 9:23 PM No comments:

I saw this on someone else's blog, and it made my day. I have been dying to get on the treadmill post surgery, and today was the day. I only ran a mile before my leg throbbed, but MAN it felt good to run. Seriously. My lungs and my heart are so happy right now. Well, that is until I remember that I can't run the Frosty Frolic. Heart. is. broken.

Hoping to get in a few more miles before Friday. Then it should only be another 14 days until I can run until my heart is content :)
Posted by Unknown at 9:19 PM No comments: 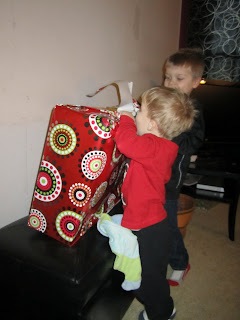 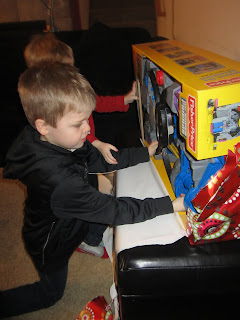 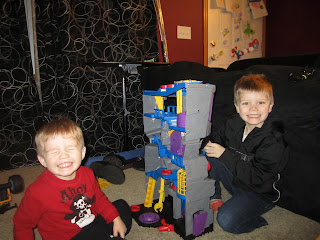 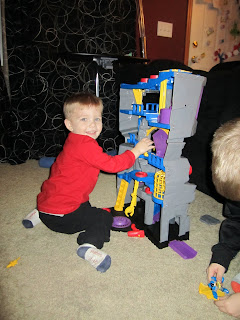 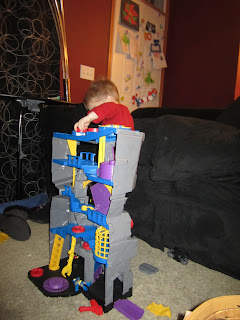 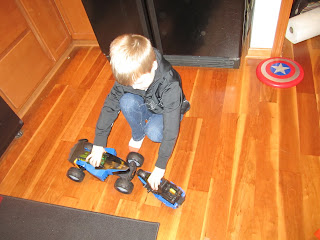 My boys got to open up their Christmas presents from Grandma Laurie yesterday. To say they were in heaven would be an understatement. They played with their new gifts ALL NIGHT LONG. They barely stopped to eat dinner, and then they resumed playing until we forced them to go to bed. My friend, Rebecca, hit it on the nose when she said, "The bat cave is like a doll house for boys." SO TRUE!!!
Posted by Unknown at 11:48 AM No comments:

Tuesday was quite possibly the worst day of my life. I do not remember a time when I was in so much pain. Even the pain before receiving an epidural for Griffin's birth wasn't as bad as this. No joke.

As usual, the surgery was more complicated than the doctor thought it would be. When I was being wheeled away, the doctor told Brandon the procedure would take an hour. It ended up taking three. Par for the course. I swear I should just live in a lab and be researched. I could at least make some money off of all my weird medical issues.

The doctor described removing the clot using these words..."It was like scraping cement off of your leg with a crochet needle." Fun images, huh? After that was all said and done, they were surprised to discover that I have a duplicate greater saphenous vein. Basically that meant that after they took out the clot, they had to ablate two veins and not just one. Hence the three hour procedure. The worst part about all of this is that you are not put all the way under. I distinctly remember looking at the clock at two different times and thinking, "I should not still be in surgery," but I didn't have the mental capacity to say anything. (Thankfully they did inform Brandon halfway through that it would be a longer time frame than expected).

I don't remember much from Tuesday except for pain. In addition to the leg pain, I got sick from anaesthesia and ended up with a migraine as well. I was admitted overnight even though I was originally supposed to be able to walk out of the hospital a few hours after surgery. In hindsight, the doctor thinks that a nerve was nicked when he was scraping away the clot. Most of my upper leg is numb to the touch and bruised, and I have a tearing sensation every time my muscle is fully tightened. The doctor is unsure how long that will last.

We are still going ahead with the second surgery the week after Christmas. I just want everything to be over and done with. I also want to have a break from school because keeping my classroom up and running last week put me over the edge in terms of stress. I ended up going back to school before I should have, but to me that was easier than letting my classroom fall apart. If you aren't a teacher, it might be hard to understand that. But those of you who teach totally understand that it is sometimes easier to work when you are sick then prepare for a substitute. Thankfully, if something goes wrong during the second surgery, I will have some time to regroup before school starts again.

I am frustrated (I am sure that's obvious), but I am also thankful that the clot is gone, and I am not in any danger of other issues. I was also reminded that we truly have amazing friends. Holly O cancelled her own plans to watch my kids on Tuesday night; Auntie Kelsey took over so the kids could be put to bed at their own house. And Holly J was my personal driver this week, so that I could stay on pain meds.

I am in pain, but I can still honestly say that Life is Good.
Posted by Unknown at 10:36 AM No comments: 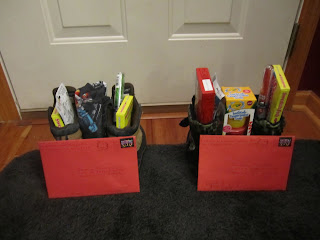 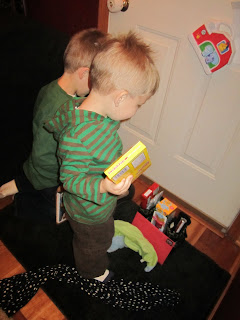 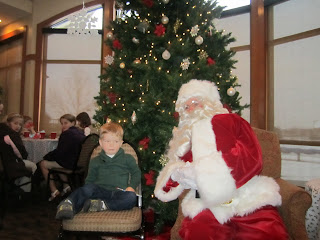 Not quite sure he wants to be close to Santa... 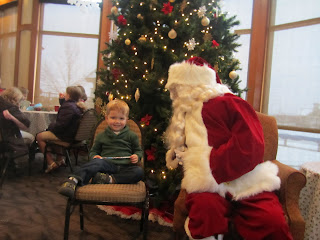 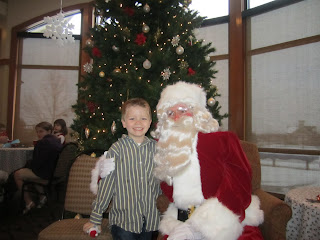 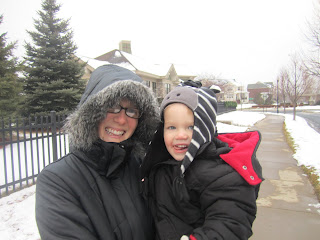 Waiting for the sleigh ride in my new winter coat :) 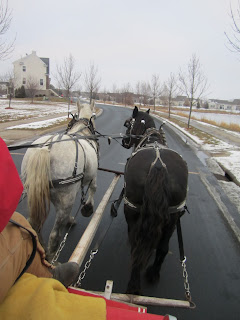 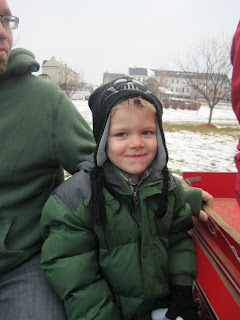 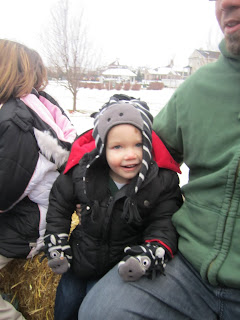 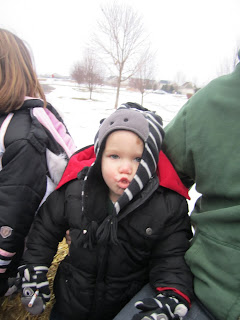 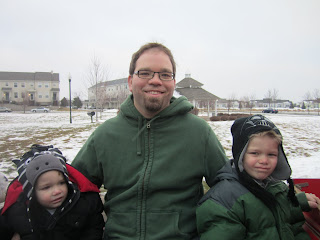 LOVE THESE BOYS!!!
Posted by Unknown at 5:25 PM No comments:

Right now, Grayson is at SUCH a fun age. He makes us laugh each and every day with his funny faces, hilarious remarks, and constant barrage of questions. As I reflect on the day, I am constantly reminded of something he did that made me stop in my tracks and think, "Man, this is such a fun stage!"

His enthusiasm is enviable. His energy is never ending. His curiosity is entertaining. His comments are witty. I could literally nibble his ears off. And man, I melt every time I hear, "I love you mommy," or "cuddle with me." I am ENAMORED with this little man.

Sometimes I feel guilty, though. Did I miss this fun age with Griffin? When Griffin was this age, Grayson was a baby, and we were just beginning to see his acid reflux issues creep through. I worry that I didn't get to experience this age with Griffin. But then I am reminded that life isn't perfect. I'm not perfect. I can't be a perfect mom. I try to soak up every moment, but sometimes frustration gets in the way. And that's okay. Because even though I can't be a perfect mom, I can find a million ways to be a good one.
Posted by Unknown at 5:16 PM No comments: Believe In Christmas Religious
Creating Christmas cards have never been this easy.
View the entire collection of cards.

Posted by Unknown at 8:31 AM No comments: 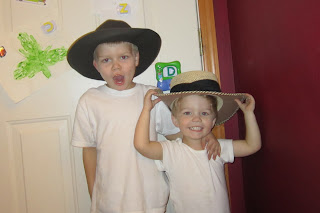 Posted by Unknown at 9:20 PM No comments:

On Sunday, my friend Holly (or as Brandon calls her, Jolly) had to take me to the ER while Brandon stayed back with the kids. I woke up that morning with intermittent stabbing pains in my upper inner thigh, and by the time I was done teaching at church I could barely stand to walk. The vein in my upper leg was slightly swollen and solid at this point, so I knew I had to be seen.

Well, despite the fact that I am still in my twenties (at least for a few months), I was diagnosed with superficial thrombophlebitis, otherwise known as a blood clot in a vein that isn't a major one. At the time, my only instructions were to take ibuprofen regularly and move as often as possible. I was also prescribed a narcotic for pain.

Unfortunately, by Tuesday afternoon, almost the entire length of my vein was rock solid and VERY painful. I was seen immediately by my regular doctor, along with a few other doctors in her practice. They also conference-called a vascular surgeon. It was determined that another ultrasound was in order to make sure the clot wasn't moving to a deep vein.

The good news is that while the clot is building up and moving down my leg, it doesn't seem to be moving towards my major vein in the groin area. While they are still concerned with the fact that the clot is building, the level of concern isn't as high when it isn't moving towards a major vein. The bad news is that the clot doesn't seem to want to go away. The pain is MUCH better, but my vein is still rock solid. Until it goes away, there will always be concern that it could travel. Currently, I am taking ibuprofen around the clock because it is considered a low-grade blood thinner. I am also trying to move as much as I can. I ran today for the first time since this started, but I only made it a mile before I had to call it quits because of the pain. On Wednesday, I will be seen again by a vascular surgeon. If the clot is still there, I will most likely be started on regular blood thinners. I really hope to avoid this, but if the clot isn't dissolving by then, I don't think I have much choice.

Leave it to my family to have more health complications. Did I mention that one of my tonsils is growing back? Yep, it's true. Despite the fact that I had them removed when I was ten, one of them is growing back. I bet you didn't know I had secret powers like those of the X-men group...

In the meantime, I am trying to think happy thoughts and follow the doctor's orders to the best of my ability. I am strangely calm about the whole ordeal, which is nice for a change :) I also felt very validated when I was told by the vascular surgeon that the amount of running I normally do has helped me avoid further complications. (Too bad that was after he told me I had veins of a 60 year old. Thank you, Rash Genes.)
Posted by Unknown at 8:32 PM 1 comment:

Griffin is definitely learning to read. He understands how words are put together, and everywhere we go I can hear him trying to sound out new words. While he only knows a few basic phonics rules, I am already amazed at how many three and four letter words he can sound out and ultimate read. Just today, after asking what sound the "sh" makes, he was able to figure out and read the word finish.

I have tried to record words he has sounded out for me. They are:
I continue to be so proud of the progress he is making in Kindergarten. I am beyond amazed that his Kindergarten teacher can run a class full of 23 five and six year old children for an entire school day. It is obvious, though, that she is doing something right!