How to Survive a Really Hot Day... 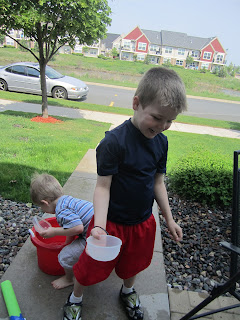 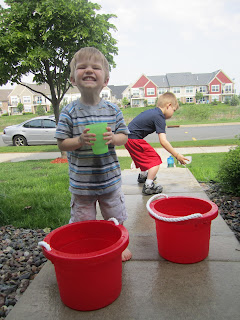 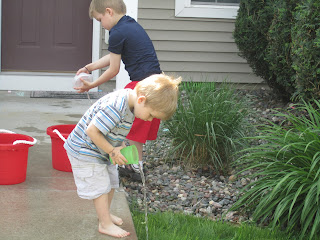 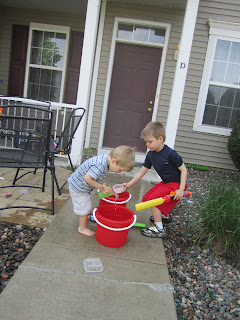 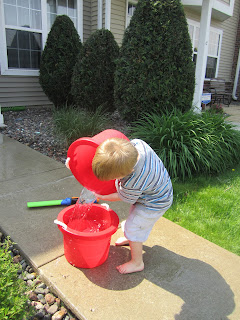 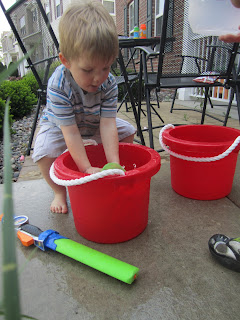 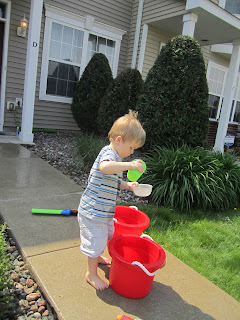 Who knew buckets of water could be so fun?
Posted by Unknown at 3:22 PM No comments: 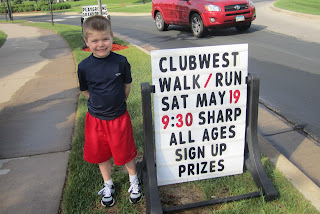 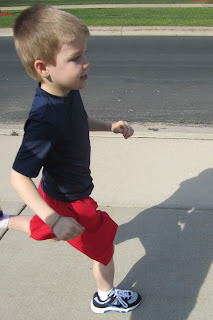 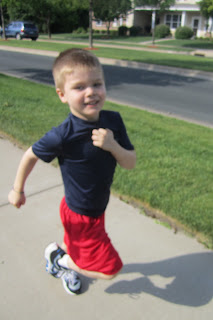 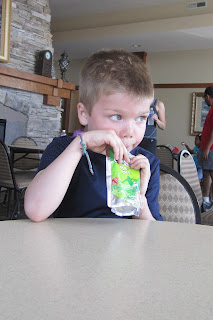 This was the race that started it all for Griffin last year. He had been asking to run with me, and I just didn't think he could last. If you can recall, though, he proved me wrong last year by running the whole thing and having a blast. Since then, we have enjoyed many one and two mile runs together.

This year was no exception. Despite the fact that it was HOT, Griffin was in heaven, and I loved running by his side. Best comment ever..."Mom, are we obeying the speed limit?" Yes, my dear Griffin. You are not that fast :) 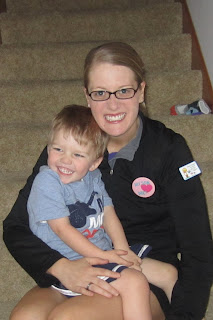 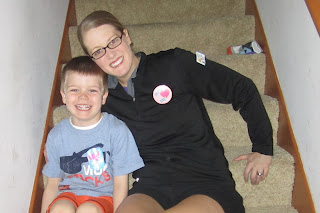 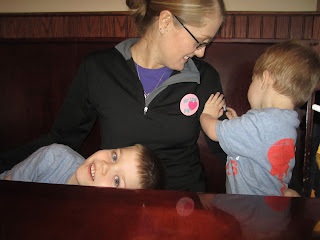 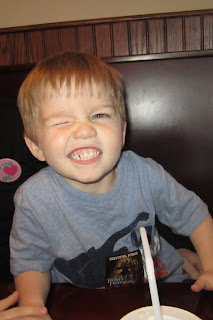 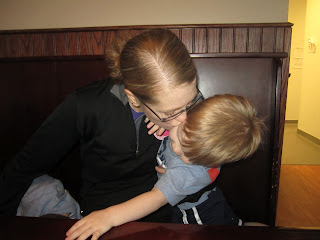 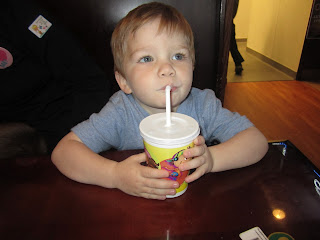 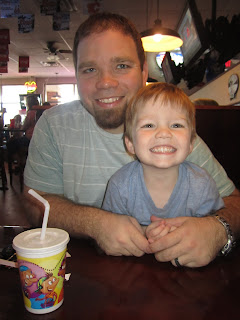 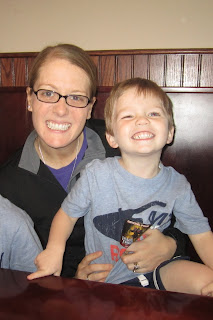 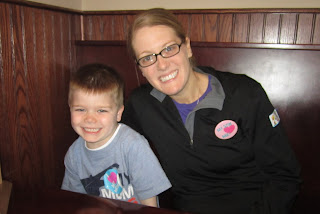 As always, my three boys spoiled me on Mother's Day. I got to take a nap, workout, swim at the Y with the entire family, and go out to eat at Beef O'Brady's. My meal was great, and I even had leftovers for lunch the next day. I picked out my own present (yep, I do that) the week before when I bought a new fan for next to my treadmill, so I wasn't expecting anything. But, Brandon had the boys get me cute cards (notice my button) and a new running outfit. I am loved and blessed. Let's just not dwell on the fact that I am pasty white, mmmkay?
Posted by Unknown at 3:05 PM No comments:

Grayson: Mom, What is that?
Me: A scab
Grasyon: Why?
Me: I had a mole removed.
Grayson: Why?
Me: To make sure it wasn't cancer.
Grayson: Oh. Is there a raisin in there?
Me: No. It's just a scab.

Grayson: I love the words please and thank you.

Grayson: String Cheese is my favorite. (Shakes head) There is no purple string cheese.
Posted by Unknown at 7:01 AM No comments:

Since Christmas, we have occasionally asked Grayson if he wanted to wear big boy underwear. He would always say no. Most often he would respond, "I just wear diapers." Once in January, he did say yes, so we let him wear a pair. After an hour he wet through the underwear, and he was completely mortified. We received emphatic "NO's!" every time we asked him after that. We never really trained Griffin (he simply asked to wear big boy underwear like his friend Peter, and that was the end of that), and our pediatrician always told me to never push a child. She would tell me that when a kid is ready, they will just do it, and it should never take more than a day or two to train them. So, we listened and never pushed. We asked every couple of weeks if he wanted to wear big boy underwear, and the answer was always the same.

After day care on Friday, I asked Grayson if he wanted to wear big boy underwear again. This time I got a "Sure, yeah." So, we put them on. He had a little trouble remembering to take the underwear off when he sat down the first couple of times, but after that, he was good to go. After only two days of wearing big boy underwear, he made it through the day at day care and at home completely accident free. He even used a public bathroom when we were at the doctor's office! We listened to our doctor, and it worked :) He isn't perfect yet, but we no longer have diapers.

I was all excited, until it hit me. No more onesies. The last piece of evidence that Grayson was my baby...gone. And that my friends, is bittersweet.
Posted by Unknown at 6:52 PM No comments:

"Mom. I am going to go potty. Get a treat. Then come back and play with you. I promise. Pinky Promise."

Posted by Unknown at 6:49 PM No comments:

Dunigan Boys and Their Quotes

"When the tornado comes, I am just going to blow my whistle and tell it to go away."  ~Grayson

Griffin was reprimanded for running down the hallway to get to his classroom the other day. When the teacher stopped him, he apparantly responded by saying “I’m sorry; I am just so excited to learn about bird behavior.”

“That book reminds me of church. You know...how we believe in and worship God. (insert huge smile). MOM! I just made a book to self connection!!!” ~Griffin

Posted by Unknown at 7:39 PM No comments:

I am writing because I am a frustrated mother and teacher. Where is my frustration coming from, you ask? Your two companies. That’s right. I am extremely frustrated and disappointed with your two companies right now.  To be honest, I am also a little shocked.

Here’s why. In the last few weeks, my 7th grade students have walked into my classroom sporting new spring clothing. Winter is long gone here in MN, and boys and girls alike are thrilled to bust out their t-shirts and shorts. I, too, have been happy to ditch my sweaters. Short sleeves aren’t my problem. The logos and sayings on your t-shirts currently sold to males are my issue.

The first t-shirt I abhorred went like this “Lazy, But Talented.” Right below this awful phrase came the ever-so-recognized Nike Swoosh. Yep. Nike. The company that makes my GPS watch and most of my running clothes is now promoting laziness. In teenage boys nonetheless. Really, Nike? You find it t-shirt worthy to promote the fact you are lazy? I’m appalled because I didn’t think being lazy was something to be proud of. As a provider of sports apparel and equipment, I didn’t think you would promote laziness. Perhaps hard work is something you should be promoting instead. Our current population of adolescents already struggles with instant gratification and working hard, yet here you are promoting its acceptability. I find it hard to believe current top athletes you sponsor would want to wear this shirt. You better believe my two sons will NEVER wear that shirt.

Then we have this one. Are you ready? “Winners Like It On Top.”  Yep. I have 7th grade hormonal boys sporting this Adidas shirt at school. (Well, they did before I made them change.) And don’t try to play the game by saying, “They like it on top of the podium.” Yes, top athletes like to win athletic competitions. But you are fooling yourself if you think young teenage boys aren’t thrilled to try and get away with a shirt that sports a double meaning like that.

Needless to say, I don’t plan on buying any new Nike or Adidas apparel any time soon. I can’t afford to throw away my watch or the clothes I already own, but it will take a long time before I support these two brands with my money.  And it will take awhile before these brands aren’t tarnished for me.